Our Vipassana retreats are currently being held online and are taught by Namchak Khen Rinpoche together with Justin Kirkwood our resident translator.

We offer our Vipassana retreats as a 3-part series to help students learn the techniques properly and apply them in their everyday lives.

Our retreats focus on providing the foundational methodologies for proper practice and are taught within the Tibetan style.

Vipassana is a meditation technique originating from India that was rediscovered nearly 2,500 years ago by the Buddha. Vipassana means “to see things clearly” or to experience “sublime insight.” If mindfulness meditation (or Shamata) is like mowing down the weeds as they crop up in our minds, we can use insight meditation (Vipassana) to pull them out by the roots.

We do this by penetrating through the appearances of things, to the essential nature of the outer world we’re perceiving, and the essential nature of the perceiver—ourselves. The Vipassana technique involves building our faculties of awareness and scanning the body for sensations. Utilizing observation and building equanimity through practice, Vipassana meditation can help us move through life’s ups and downs without reacting with craving and aversion. Read more about Vipassana in our blog post here or watch Lama Tsomo discuss Vipassana in this short video.

Currently our retreat structure provides 90% of the time for the teachings and 10% to meditation.

We recommend meditating before morning sessions, during the mid-afternoon break session and or after the evening discourse. Vipassana retreats must be attended in order, you can view our upcoming retreat schedule here. 1. What is Insight Meditation according to the Vajrayana (Tibetan) pathway.

2. Techniques to begin to incorporate a vipassana meditation practice into your daily life.

3. Opportunities to ask questions and engage with Khen Rinpoche and community members. Part two in our three-part Vipassana retreat series, this three-day retreat will explore Vipassana meditation to help you understand your true nature. Using this ancient practice, students learn to contemplate the nature of reality using our body and feelings.

In this retreat we begin to understand our perceptions and the essence of our true selves to ultimately become more joyful and equanimous. The retreat requires that students have received Khen Rinpoche’s teachings on Intro to Vipassana or have an established Vipassana practice.

2. An Examination of The Why & The What of Vipassana Meditation

3. Opportunities to ask questions and engage with Khen Rinpoche and community. This retreat is suitable for students who have completed the first two Vipassana retreats or who have advanced experience in practicing Vipassana.

2. An In-Depth Examination of exploring the nature of the mind and experience

3. Opportunities to ask questions and engage with Khen Rinpoche and community.

Our intention is to make our retreats accessible to all. When registering for a retreat please choose the tuition amount that works for you. If the program costs present a financial barrier or you are interested in a stipend to offset the cost of childcare, please contact amanda@namchak.org.

Zoom link will be provided upon registration. 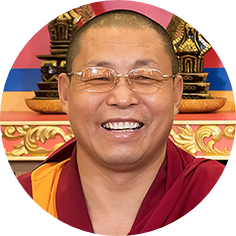 Khen Rinpoche is a Tibetan Master who completed the study of all the Indian Buddhist philosophical traditions and the Nyingma School of Tibetan Buddhism under numerous great teachers. He also completed nine years of rigorous training and served at the Namdroling Monastery for several years.

Enthroned as Khenpo by HH Penor Rinpoche, he taught at the Shedras of Ringo Tulku and Shechen Monastery for many years, as instructed. Khen Rinpoche strictly abides by his precepts in everyday life and is diligent in his practice. He visits and teaches around the world, including the Namchak Foundation and the Namchak Retreat Ranch, Taiwan, Hong Kong, and other locations. While in the U.S., he resides and meditates at the Garden of One Thousand Buddhas in Arlee, Montana.

What People Are Saying

“Lama Tsomo gives me new ways to summon calm and equanimity in a sea of storm in the world through various meditation techniques.From her to me, from me to you, from you to the universe with each breathe.The world is better.”

Which Vipassana retreat should I attend?

Intro to Vipassana is suitable for new meditators and students looking to learn more about this ancient technique.

Exploring Mindfulness of Feelings and Thoughts is part two in our Vipassana series. This retreat is suitable for students that attended our Intro to Vipassana retreat OR for students who have a regular meditation practice and are familar with Tibetan Buddhism.

Our third Vipassana retreat is suitable for students who have taken our second Vipassana Retreat, Exploring Mindfulness of Body and Feelings

How much time do we spend meditating?

Can I ask Khen Rinpoche questions?

This is an online retreat, do I have to be on camera?

How should I prepare for a retreat?

We suggest creating a comfortable and quiet space for you to attend a retreat! Students have shared that preparing snacks and meals beforehand helps create space during breaks, while also providing further spaciousness for meditation practice and reflection. Having a journal on hand can also be helpful.

Who is Khen Rinpoche?

Khen Rinpoche is one of the younger brothers of Tulku Sangak Rinpoche. They are descendents of the Great Treasure Revealer Tsasum Lingpa, since nearly three centuries ago, and became known as the Namchak family. The Namchak family originates from the Sum (pronounced “soom”) family of the Tong clan, one of the six original clans of the Tibetan people.

After entering the Namdroling Monastery Shedra of HH Penor Rinpoche, Khen Rinpoche completed the study of all the Indian Buddhist philosophical traditions and the Nyingma School of Tibetan Buddhism under numerous great teachers. He also completed the nine years of rigorous training and served at the Namdroling monastery for several years. Enthroned as Khenpo by HH Penor Rinpoche, he taught at the Shedras of Ringo Tulku and Shechen Monastery for many years, as was instructed. Khen Rinpoche strictly abides by his precepts in everyday life and is diligent in his practice.

As it was necessary for assistance to Tulku Sangak Rinpoche, Khen Rinpoche was sent forth from Namdroling by HH Penor Rinpoche. He taught at the Nunnery and Purbaling retreat centers in Nepal, beginning from the Preliminary Practices through the stages of generation and completion, and then to Tsalung. Besides representing Tulku Sangak Rinpoche as his spiritual heir, he visits and teaches a variety of places around the world, including the Namchak Foundation and the Namchak Retreat Ranch, Taiwan, Hong Kong, and other locations. While in the U.S., he resides and meditates at the Garden of One Thousand Buddhas in Arlee, Montana.

We can’t wait for you to join us!

The Buddha included Sangha as an essential component to developing on the path of Dharma, it is referred to as one of the Three Jewels of Buddhism.

We hope to see you at one of our upcoming retreats, events, or daily meditations to connect and grow in Sangha soon. You can learn more about our community-lead meditation groups, what we call Learning Circles below! Not quite ready for a Retreat?

At Namchak we offer a variety of events and offerings to help you on your meditation journey. Browse our guided meditations or take our Always Smiling eCourse to get started with meditation.

Subscribe to our enewsletter to stay up-to-date on retreats, new eCourses, guided meditations,
our retreat ranch, Tibetan Buddhist wisdom, and the Compassion in Action Network.